Read the latest news from Fairway Green, below! 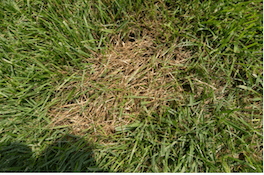 Summer is turf disease season for cool season and warm season grasses. Brown patch fungus on Fescue started in early May this year. We have seen sporadic cases of Pythium and Dollar Spot on warm season turf.   Brown Patch Fungus activity has been high on Fescue at the end of June due to the high humidity and thunderstorms. It is always better to control diseases preventively vs. curatively. Dollar Spot is a common disease on Bermuda, Zoysia and Bluegrass.

Yellow Nutsedge is a prolific and very difficult weed to control in many lawns and natural areas. Nutsedge is not a broadleaf weed or grassy weed but is in the sedge family.  Yellow Nutsedge is a summer perennial that flourishes from April/May to around September/October. It reproduces from tubers (nutlets) under the soil and can spread from rhizomes.  Each plant can produce hundreds of tubers during its growing season. These new tubers will be new plants in the years to come. Nutsedge will have a triangle stem and is easily felt when you twirl a stem between your thumb and forefinger. Yellow Nutsedge will grow much faster than the existing turf and will have a thin shiny appearance. 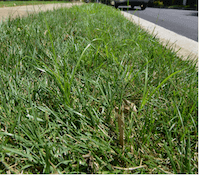 Post-emergent broadleaf weed controls for weeds like clover and dandelions will not control Nutsedge.  There are limited products available for controlling Nutsedge and all of them require frequent applications over multiple years to offer acceptable control.

Why is my Fescue lawn not as green right now?

Heat stress is often misdiagnosed as a fungus or other issue.  Signs of heat stress include a darker color to the lawn, visible footprints, and a leaf blade that is folded and thin looking. The grass blade appe 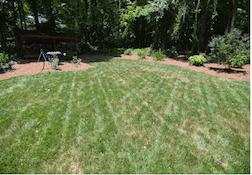 ars to be almost straw like on all types of turf, including Bermuda and Zoysia. If the lawn looks ok in the morning then looks poor in late afternoon, it is probably heat/dry stress. Tall Fescue will usually go into a semi-dormant state and shut down.  Most of the turf will bounce back with cooler temperatures and rain fall. It is important for the fescue to be healthy from proper fertility and a 3.5” to 4.0 mowing height before, during and after the semi-dormant state. We have about two more months of these climatic conditions.

Many people are under the impression that warm season turf lawns like Bermuda and Zoysia cannot experience heat related stress during summer.  However, warm season turf grasses are just more heat tolerant. 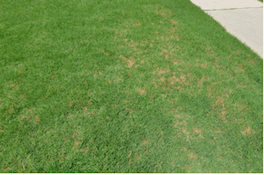 Dollar Spot is a common disease on Bermuda, Zoysia and Bluegrass

They generally recover from these stresses better than a cool season turf. Warm season and cool season turf stress is exacerbated when the turf is growing in poor conditions (i.e. shade, compact soil, etc.) and/or struggling to recover from a harsh Transitional Zone winter.  Like Tall Fescue, most of the turf will bounce back if the turf was in good health.

Warm season turf is heat tolerant but not exempt from experiencing the same conditions as cool season turf like Fescue during hot dry weather. Tolerance means it can tolerate those type of conditions longer and have the ability to generally recover faster.

Fescue needs to be seeded in September and early October; not the spring. Tall Fescue in the Transitional Zone faces many challenges during the year that can create turf damage or injury.  This is why it is important to seed your fescue lawn every fall. Diseases can be 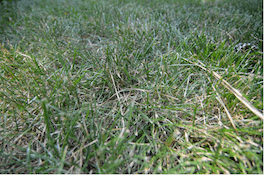 Close Up of Fescue Heat Stress

one of the causes of turf damage.  Brown Patch Fungus, Dollar Spot and Pythium can be devastating to fescue.  Extended dry periods along with the heat make for a damaging combination on all turf types. In fact, when the ground temperatures reach the mid 80 degrees to low 90 degrees, cool season grasses (Fescue and Bluegrass) root system stops developing and will lose root mass that supports plant survival.  Extended dry periods exacerbate cool season turf decline. Many people cannot switch to a warm season turf due to shade conditions in the lawn. All warm season turf types require full sun (not filtered) for at least 8 hours to grow properly and survive.

Fairway Green Mosquito Control Program has been very successful.  We are receiving praise from customers that feel they can use and be in their yards during the summer again. Safely enjoy the outdoors this summer by controlling disease-ridden mosquitos at home.