May 2017 News from Fairway Green

Poa Annua vs. Crabgrass We thought it important to mention Poa annua (annual Bluegrass) again due to the many inquiries on this grassy weed and for newcomers to Fairway Green’s newsletter. Fairway Green has been receiving many calls from customers and non-customers concerned that they have Crabgrass in their lawn. However, in most cases it… Read more »

We thought it important to mention Poa annua (annual Bluegrass) again due to the many inquiries on this grassy weed and for newcomers to Fairway Green’s newsletter. Fairway Green has been receiving many calls from customers and non-customers concerned that they have Crabgrass in their lawn. However, in most cases it is Poa annua they are seeing not Crabgrass. Due to the slight increase in ground temperatures this spring, Poa annua has been an issue a little earlier in all turf types this year. Poa annua does a good job of blending into Fescue until it starts to seed.

Poa annua (Annual Bluegrass) is an annual grass that is most noticeable this time of year because of the large amount of tan colored seed heads the plant is producing now. Poa annua actually germinates in the fall starting in late August through the winter; the same time you seed Fescue in this area. This is why pre-emergent applications for Crabgrass in January, February and early spring do not control Poa annua. Poa annua was mature when the pre-emergent applications were applied. Poa annua will generally end its life cycle in Late May and June. It is a prolific seeder and seed is generally viable the following year. It typically grows in areas that have poor compact soil and where your desired turf is thin or nonexistent. However, since it is a common grassy weed in our area, it can be found anywhere, even in the middle of the yard. The good thing is it has just about ended its life cycle at the time of this writing in early May. It can continue to thrive the end of May in cooler springs. 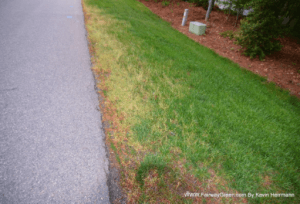 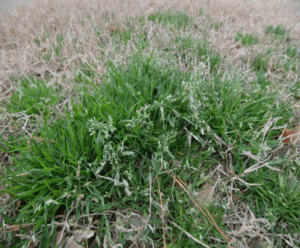 Close up of Poa annua actively growing in Bermuda

Brown Patch Fungus on Fescue typically starts in May. However, we have seen a few cases of Brown Patch, Dollar Spot, Rust and Helminthosporium diseases in late April.

Brown Patch Fungus activates within a distinct set of climatic parameters. Brown Patch will activate when the temperatures are above 75 degrees with high atmospheric moisture. This moisture can be in the form of rainfall, irrigation or humidity. Brown Patch fungus can be devastating to the lawn. 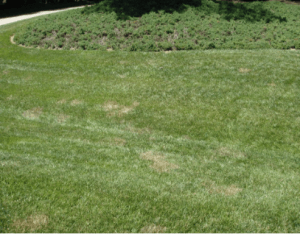 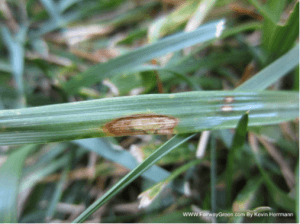 Close up of Brown Patch Lesion on Fescue

White grubs are the larvae of Scarab beetles. There are several beetles that produce the grubs we see while digging in our lawns and natural areas. Grubs species in North Carolina include Southern and Northern Chafer, Japanese, Asiatic, Green June and the May beetle. Grubs are identified by their cream off white colored body and off brown color hind part and head. Grubs have six legs and are from ¼ to 1½ inches. They are often seen in their C-shaped position in the soil.

White grubs create damage in turf by eating the root system of the host plant. Turf damage is usually observed in late spring through fall with an off color wilting appearance. Many times it is misdiagnosed as disease, heat or dry stress. The lawn may have a spongy almost loose feel to the soil under the turf. In severe cases, the turf may roll up when tugged on from the lack of roots holding it to the soil. Activity from birds, raccoons, skunks and moles could indicate a grub infestation. To determine the extent of grub activity and the need for control, you will need to use a spade to remove the upper 3 inches of soil in a 12” x 12” area. Cut back the turf sample to count the number of grubs and inspect root damage. If nine or more grubs are observed, take immediate action utilizing proper products. All turf types are susceptible to grub feeding and damage.

Prevention is key to maintaining a safe and comfortable season. Empty standing water in areas that collect and promote mosquito growth and reproduction. Some areas to consider: 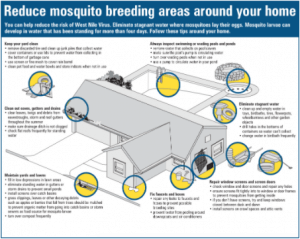 Many warm season turf lawns struggle to strive due to improper mowing height. Mowing your type of warm season turf will drastically improve the overall quality and appearance of the lawn. Bermuda in a home lawn requires mowing every few days at 0.5” to 1.5”. Mowing at this height encourages denser turf and spreading. The lawn will look thin and grow upward if mowed above this height. In addition, it lowers the quality of the grass increasing the possibility of damage. Zoysia requires a mowing height between 1.5” and 2.5” based on your particular variety. A safe bet would be around 2”. Centipede needs to be cut low around 1” to 1.75” to perform well. St Augustine requires a mowing height of 1.75” and 2.25”.

Yellow Nutsedge is a prolific and very difficult to control weed in many lawns and natural areas. Nutsedge is not a broadleaf weed or grassy weed but is in the sedge family. Yellow Nutsedge is a summer perennial that flourishes from April/May to around September/October. It reproduces from tubers (nutlets) under the soil and can spread from rhizomes. Each plant can produce hundreds of tubers during its growing season. These new tubers will be new plants in the years to come. Nutsedge will have a triangle stem and is easily felt when you twirl a stem between your thumb and forefinger. Yellow Nutsedge will grow much faster than the existing turf and will have a thin shiny appearance.

Post-emergent broadleaf weed controls for weeds like clover and dandelions will not control Nutsedge. There are limited products available for controlling Nutsedge and all of them require frequent applications over multiple years to offer acceptable control. 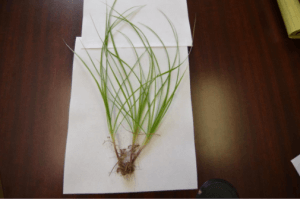